Can We Learn Anything Meaningful From TV...? 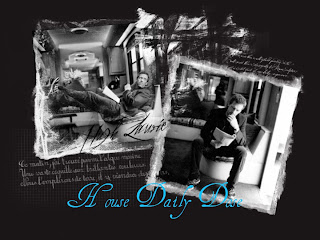 My guess is when asked most people instinctively answer "no". I don't think I've ever believed that. The problem is not that TV is that bad (though there is a lot of poor quality production) but there is also some really clever and ultra smart TV.

Let me justify my position with facts! Our daughter recently introduced us at home to "House". The problem is it's completely addictive, but then again the nights are long and we tend to be indoors. I actually believe I get smarter just by watching this. Anyone would, it's that good. Check it out for yourself.

There's a site for this programme . This is a programme ANYONE can learn from. It's also a must for anyone in any line of work. The lessons are endless. For those of you who don't know. House is based on a misfit genius doctor called Dr. Greg House, invariably known as House. He has a limp as a result of a faulty diagnosis and he is in constant pain. He's also a genius diagnostician. What I love about him most is his stunning ability to associate unrelated things and events, think laterally and never believe a problem is greater than his ability. Sure he's arrogant, selfish, indulgent, belligerent and "morally bankrupt" to use his own words, but the magic is in his genius.

What can business learn from House...? Ok, so he's not a role model for people in his interpersonal relationships but he could teach anyone how to think differently. That's his genius. He thinks in 3D. Broadly, vertically and in depth. I believe anyone in any kind of problem solving role can learn from the brilliance of this series. They say when you park your own ego it makes it compelling to work with the best. They are demanding and sometimes completely unreasonable, but we put up with that due to their brilliance. His gift to us is to look at what we see differently and be open to new and fresh interpretation. When we do that we become creative and then we become different. You can see I'm hooked. I wouldn't be if I wasn't learning.
Posted by Alasdar Browne at 07:01